Virtual food brands, often driven by real celebrities, are rapidly spreading across the country. Do they help or hurt independent restaurants?

A video from MrBeast, a 22-year-old YouTube star with 54 million subscribers, usually goes something like this: An outlandish setup — say, staging a fake robbery — results in a fan’s winning thousands of dollars or a new car. But in late December, MrBeast (real name: Jimmy Donaldson, an upbeat bro from North Carolina) dropped something different on his viewers.

“I literally just opened 300 restaurants all across America,” he said in a video announcing MrBeast Burger, a chain serving smash burgers and fries. “But we only serve people through delivery apps.”

But MrBeast Burger is not quite what most of us think of as a chain, or even a restaurant. In exchange for a cut of sales revenue, the brand supplies the name, logo, menu, recipes and publicity images to any restaurant owner with the space and staff to make burgers as a side hustle. When a customer orders from the MrBeast Burger in Midvale, Utah, the food is prepared at a location of the red-sauce chain Buca di Beppo, following a standardized MrBeast recipe. In Manhattan, a MrBeast Burger is prepared at the neighborhood bar Handcraft Kitchen & Cocktails. MrBeast Burger has sold more than a million sandwiches since the brand debuted in December.Credit…Mykhailo Polenok / Alamy Stock Photo

Call it a ghost franchise — and expect to see many more of them this year, with and without celebrity names attached.

The parent company of Nextbite, another pioneer of the model, received $120 million in venture-capital funding in October for its 13 virtual brands. Franklin Junction, founded last year, helps restaurants do business as known food brands, including Wow Bao and Nathan’s Famous. Companies like Future Foods, Combo Kitchen and the Local Culinary are all making similar plays.

In the delivery app era, the ghost franchise can be a lifeline for the independent restaurateur, a way to make thousands of dollars a month in a devastating time. It can also be a liability, exploding the marketplace in ways that serve big brands more than small businesses.

James Garofalo, 52, grew up working at his father’s diner in Chicago Heights, Ill. Now, he’s the chief operating officer at Goddess and the Baker, a cafe with several locations in Chicago and one in Brookfield, Wis. At first, Mr. Garofalo was skeptical of the ghost-franchise model. But as the pandemic cut off foot traffic, he decided it might make sense. “At this point, you’re looking for ways to generate dollars, keep staff on,” he added. In the kitchens of Goddess and the Baker cafes in the Midwest, a dozen delivery-only ghost brands are prepared.Credit…Anjali Pinto for The New York Times

The day-to-day is less chaotic than it sounds. Delivery-app orders stream into one tablet, and the takeout containers all come from the same pile; nothing is branded except HotBox orders, and those have just a sticker. Recipes from Nextbite’s Colorado test kitchen are easy to follow, and the company recommends ingredients from the suppliers Mr. Garofalo already uses. Nextbite takes a 45 percent cut of sales, but handles all delivery-app fees, which would be, for Mr. Garofalo, as high as 30 percent per order. In his best month so far, he cleared $20,000 across the 12 brands.

The arrangement has allowed Mr. Garofalo to add new types of food without the labor of menu development or the worry of muddying his own brand. But what restaurant owners are really buying from these companies is not just recipes or a cutesy name. They’re buying a solution to a problem facing every small restaurant that’s living as a name on a screen among all the other names on a screen: visibility. 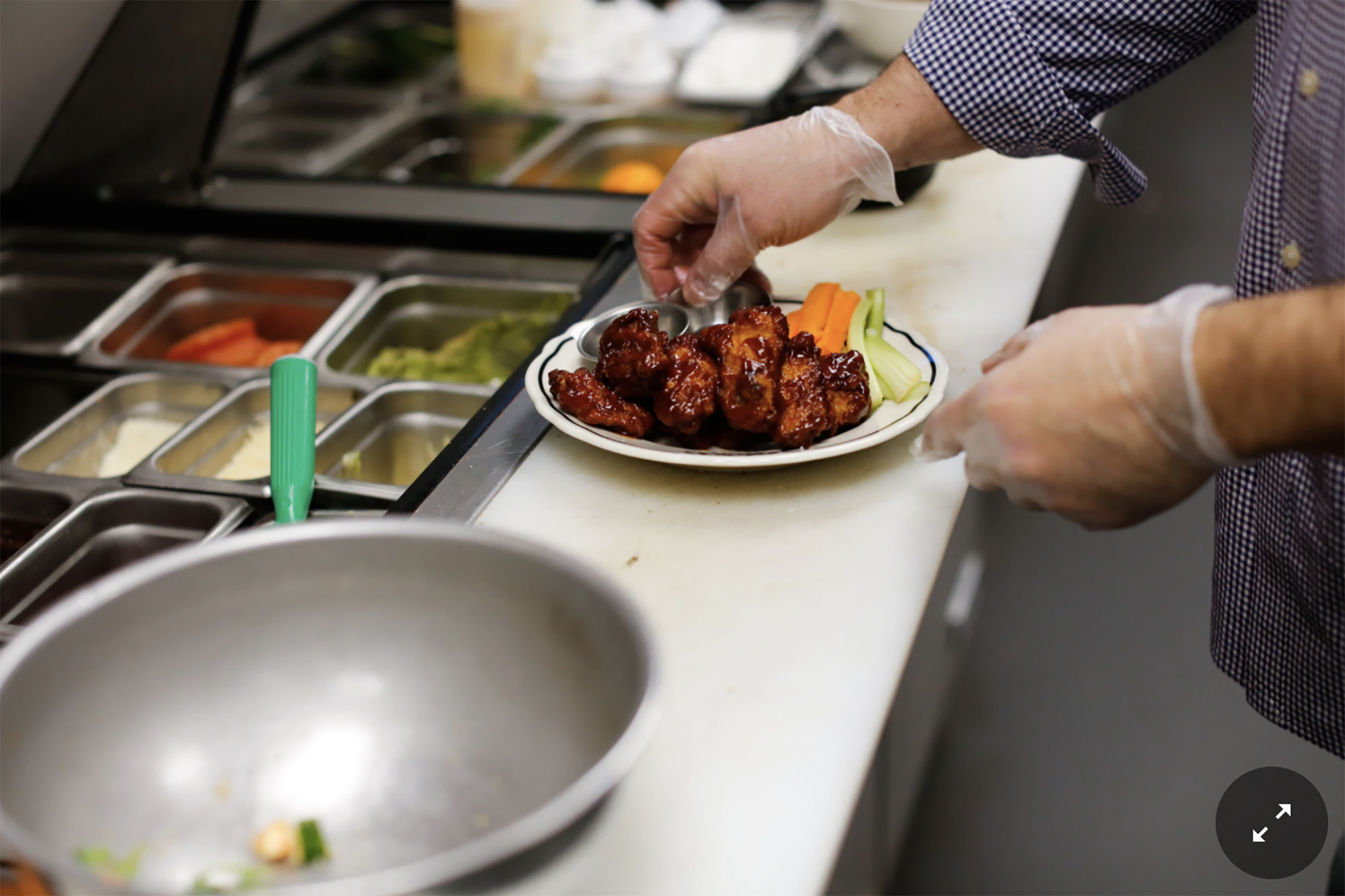 The addition of the ghost-franchise menus helped Goddess and the Baker maintain its revenue stream as foot traffic fell during the pandemic.Credit…Anjali Pinto for The New York Times

“Before Covid, you had some restaurants that did not need to be on these third-party systems,” said Kymme Williams-Davis, the owner of Bushwick Grind, a cafe in Brooklyn. “But now every restaurant, every cafe, every commercial kitchen and every ghost kitchen is on these apps. It’s more competitive.” If someone on her block searches Grubhub for espresso, Bushwick Grind is buried below more than 20 shops, some of them miles away.

The business model hinges on deals the ghost-franchise parent companies strike with third-party delivery apps (which are notorious for taking advantage of workers and restaurants), using the leverage of having hundreds of listable “restaurants” to broker top spots for them in search results. If a customer in the Brookfield area searches for grilled cheese on DoorDash, Grilled Cheese Society comes up as the first suggestion. In a search for wings, Firebelly is third and Wild Wild Wings is fourth.

“Like anyone else, we pay to be on apps and we pay for placement,” said Geoff Madding, Nextbite’s chief executive. He added, “The more value you’re bringing, probably the stronger negotiating position you’re in.”

In January, Ms. Williams-Davis started selling online as Mariah’s Cookies, the Virtual Dining Concepts brand partnership with the singer Mariah Carey, as a test run to see if the extra sales could help Bushwick Grind “stay alive during this really unprecedented time,” she said. She had to close for six months last year, she said, after her father and several of his cousins died from Covid-19.

Her cafe is an exemplar of a community-minded business; she runs a community refrigerator, feeds vaccine workers and has plans to open an urban farm.

“I don’t want to contribute to not buying local, right?” she said. “In one way, if you’re buying from Mariah’s Cookies, and that name and that advertising machine can get customers, you kind of are buying local because I’m making the cookies. But at the same time, the perception is that you’re not buying local. I’m on the fence. But if it nets out to hurt small businesses, it’s not something I’m going to continue to do.” Prepared in the kitchens of restaurants nationwide, the HotBox by Wiz brand, from the rapper Wiz Khalifa, offers wings, fried macaroni bites and potato chips with cheese sauce.Credit…Hot Box by Wiz

But even an independent restaurant can get a virtual brand up and running in less than 30 days, with few limits to the number of brands one owner can take on. And that potential speed of proliferation could result in a delivery-app ecosystem where the ghost-franchise parent companies duke it out at the top, while the truly independent restaurants are pushed farther down the list.

In New York City, this is already happening. If you’ve noticed the torrent of perplexing restaurant names on delivery apps, many of them confusingly similar, this too is a manifestation of the ghost franchise.

When Jacky Cheng, a resident of the Kips Bay neighborhood of Manhattan, ordered from Village Breakfast Snob on DoorDash, “it didn’t really cross my mind that it was a ghost kitchen,” he said. “Although it should have, because who the heck names their restaurant that?”

The food, he later found out, came from a bodega in the East Village that is operating as at least 10 ghost brands, including LA Breakfast Club and American Cheesesteaks. New York is now home to the Pancake Snob, Breakfast Burrito Snob, Sushi Snob, Pad Thai Snob, Chicken Tikka Snob and Snobby Chicken Wings. There’s also the Burger Bae and Breakfast Be Loved. 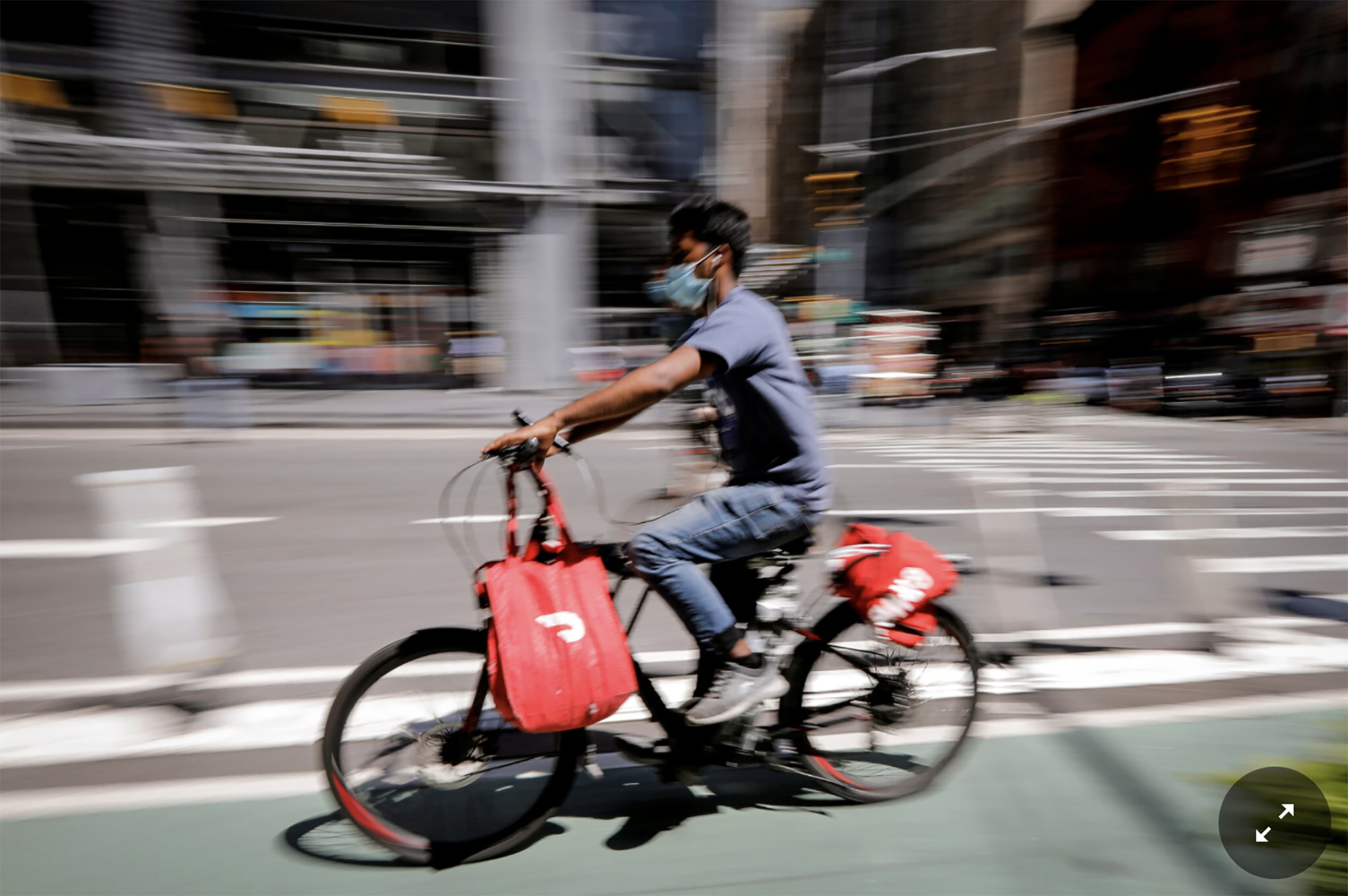 The style of these names creates a marketplace that parallels Amazon in some ways, said Lea Chu, a group director of naming at the brand strategy firm Siegel & Gale. You have a need — there, a hole puncher; here, a breakfast burrito — and a hyper-specific listing is there to fill it.

Seven years ago, Ms. Chu surveyed the name of every restaurant in Manhattan, a project that took weeks. Restaurant owners usually want names that won’t sound silly in a year, she said. Here, that matters less.

“What’s the worst that could happen?” Ms. Chu said. “Your name becomes irrelevant and you have to change it? It probably doesn’t matter. There’s so much fluctuation in this restaurant landscape that everyone’s going to be used to names changing all the time.”

For now, we seem to be entering a period in which every “Bachelorette” contestant from the last 18 years will have a virtual deli. Mario’s Tortas Lopez and Pauly D’s Italian Subs are listed in dozens of markets. Since January, at least 130 outlets of Guy Fieri’s first virtual brand, Flavortown Kitchen, have opened. And MrBeast Burger has already spread to Canada. A following of 54 million YouTube subscribers sells a lot of sandwiches — more than a million in the first two months, in fact.

“My son is 18, my daughter is 14, and they think MrBeast is hilarious,” said Cece Kaufman, an interior designer in San Francisco.

In December, the family went on what Ms. Kaufman cheerfully called a “road trip” — a 40-minute drive into the delivery zone of the closest MrBeast Burger, to meet a DoorDash driver carrying three smash burgers and two orders of fries. The teenagers, like most ghost kitchen customers, had no idea where the food was made.

“They didn’t care,” Ms. Kaufman said. “The wrapper had the MrBeast stickers on it, so they thought it was great.”